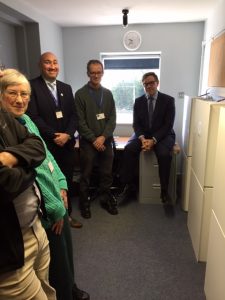 As part of the Government’s ‘Green GB Week‘ REPOWER Balcombe (RPB) invited Horsham MP, Jeremy Quin, to Turners Hill Primary school. The aim of the meeting was to share with Jeremy the huge ‘green’ achievements made by the school itself, and in partnership with RPB. Jeremy accepted our invitation and visited the school on the 19th October 2018 – Climate action in communities day.

RPB had a number of objectives for the meeting:

Jeremy seemed impressed by how much RPB had achieved versus, for example, Carillion which had been awarded several solar for school projects, yet had delivered done, whilst RPB had delivered six as well as their first installation at Grange Farm. And battery storage at Turners Hill along with their solar panels and other ‘green’ initiatives, including LED lighting and improved building insulation, had reduced the school’s bill for off-site generated electricity by 90%.

But the real eye-opener for Jeremy was the ‘Traction Project’. He was surprised that he had not heard of such a significant project taking place partly in his constituency.

As the meeting reached its conclusion Jeremy asked that RPB submit five suggestions for how government could improve its support for Community Energy groups, which he committed to pursue on our behalf, although he made the point that he could make no guarantees that our suggestions would lead to changes in government policy.